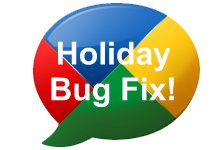 During the holiday’s this year users started to see posts show up in their inbox stating that the post has been updated, once the user opened the Buzz post there was no new comment or update. What’s happening here is that the Google Buzz algorithm thought that a good comment was spam and marked it as such. The bug caused the inaccurately marked comment to falsely show up on the post and caused what I call a ghost update.

Once the main crew at Google Buzz came back from holiday vacation the bug was fixed by the next days. Now all posts and comments will function as normal starting from January 4th, 2011 and on.

But what about posts that happened before January 4th? Well, these posts still may have the bug, but I have the fix for you.

How to Fix the Google Buzz Holiday Bug:

I hope you won’t have to use this, but if you do, I hope it helps.