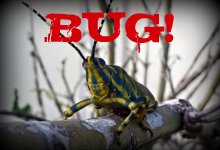 Help me track down a Android or Evernote bug!

I first thought this was a Evernote issue, but now I am not sure. I thought that this was an Evernote bug since I have some long notes that I edit and when I went to edit the end of the note, the note would jump around. Well recently I wrote a long post in the WordPress app for Android and I started to get the same jumping around. Has anyone else seen this? I would like to get a confirmation of the exact issue before I submit it to Android or to Evernote.