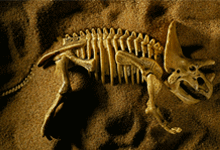 Something that many of you might not know is that I love Dinosaurs, and have since I was a little kid. This morning after watching a Dinosaur TV special I started to think…

Did Dinosaurs ever have to worry about Tornadoes?

Central United States was very animated when it came to Dinosaurs millions of year ago, but today central United States is hammered with Tornadoes. So… Did the large in-land sea stop Tornadoes from happening or did it just move them to the eastern seaboard? If a Dinosaur was hit by a Tornado, would it be torn to pieces or would it just be knocked over on its side since many of them weighed thousands of pounds? These are all questions that popped up into my mind this morning. If any of you can answer any of them that would be great, if not then at least I will have these items written down on my blog.

One Comment on “Did Dinosaurs Get Hit By Tornadoes?”