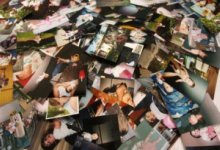 While on a walk with my dogs I took some photos with my phone and this got me think about the random, sometimes blurry photos that I take which don’t really belong to any specific event. They’re just random photos of things that I find interesting. Well, this got me to think about all of the images that I store and the many locations that I store them in. Not only do I keep personal photos in Picasa Web, I have photos stored on my local computer and I also keep an inspirational library of website screenshots, sketches, character designs, typography and more in Evernote. Now these things may not be 100% related but they are all random images that don’t belong to a specific event or “Album”, but rather many events and many albums.

Now I would love to store all of my photos into Picasa, including my inspirational images. This would allow me to not only keep all of my images in one place, but make it easier for others to view them as well.

Again thanks to how my brain works this got me to think about how photos posted from Google Buzz create a new album each time I upload a new image (which sucks). Ok, well this was fixed last night after I started writing this post, but I will use it anyways as an example.

Now you can see that something as simple as storing photos can become a true hassle, which many people including myself, give up on. What if you want to store a single image in two albums? Currently you would have to create two copies of that image which adds to the complexity and frustration of simply storing photos. So, I decided to try and come up with a way to to make storing photos and images even easier, while at the same time more robust.

Imagine a photo storage software, in this case Picasa which allowed you to store photos and images with labels rather than albums. Think Gmail meets Picasa. This would make it possible for images uploaded from Google Buzz to just be labeled “Buzz”, making all images related to Google Buzz easy to find, while at the same time, some of those images can be labeled “idea” if it was an idea that you had and shared Google Buzz. Using labels would also make it possible to assign dozens of photos to a specific label to create a “Album” if we wanted. Having users use labels rather than albums will give both the users who love albums and users who hate albums a since of joy.

What are you thoughts? Would you rather use albums or do you think labels in Picasa is the future?