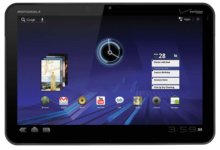 What a wonderful device.

The device is very responsive and is a wonderful addition to have between my smart phone and desktop computer.

While I played around with the Xoom at the Verizon store I was pretty sceptical. The first couple of minutes I had to figure out the device, it came with a bit of a learning curve and a few apps forced closed on me. After a fresh restart the thing was running perfectly. After the restart I was hooked, and so I bought one.

The Xoom Back Home:

As soon as I got the Xoom back home I started to load my apps on it, and thanks to the apps on my phone being synced to my Google account, those apps downloaded and installed once I logged in.

Not all apps were downloaded from my account, some did not support the Xoom which is understandable. Some of the apps that did download did not scale to full screen just like what happens with iPhone apps on a iPad so that I wasn’t too worried with that.

The apps that did scale worked perfectly and have even made me use them more thanks to the added real estate.

All devices have their quirks and this one has its own.

This is one of the best deviced that I have ever owned, and I can say that apps will run on par with the iPad in terms of stability and though the iPad has more tablet specific apps(which it should, it has been out for a year) the Xoom is a much better device in every other way.